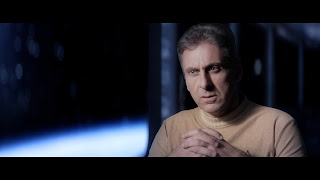 Funny how a simple message of congratulations can turn into something worth writing about! After JJ Abrams announcement (and subsequent confirmation by CBS and Paramount) that the lawsuit would be settled amicably and Alec Peters and company would be allowed to continue producing Axanar, I shot Alec a message to congratulate him. He responded, and told me how much he appreciated reading my blog posts on the subject. I tried to get some idea of how the negotiations were going, but he obviously couldn't talk about those. However, he did tell me the following, which he is allowing me to share with you!

Based on the official statement from CBS that the network is finally going to issue fan film guidelines, Alec has put together a group of Star Trek fan film producers to discuss a guideline proposal which reflects their concerns, and the apprehension of the thousands of fans who have rallied behind fan films for decades.

Alec said he contacted almost every major fan film producer seeking suggestions on a proposed set of guidelines.  Eight of them were invited to a Facebook chat group to discuss the proposal.  “I just felt that all the active fan films should be able to share their thoughts together in a constructive way,” he said. “Most of them don’t speak to CBS, and clearly we are communicating with them regularly, so it felt like the right thing to do."


“Unfortunately, James Cawley of Star Trek: New Voyages said no without even hearing a proposal. He was the only one who declined.  Everyone else wanted to at least see what a set of proposed guidelines would look like.”

As a starting point, Alec created some suggested guidelines which he forwarded to Todd Haberkorn of Star Trek: Continues, John Broughton of Farragut,  John Atkin of Yorktown, Nick Cook of Intrepid, Michael King of Valiant, Scott Johnson of Starbase Studios (who produce their own fan production as well as let other productions use their facility), Greg Lock of Star Trek Ambush, plus an unnamed representative of Star Trek: Renegades. “Everyone I sent this to agreed to at least look at the draft, and half of them became part of the ongoing discussion.As for the guidelines themselves, "It is still very much a work in progress, but we hope that we can at least have something to send to CBS so they appreciate the concerns of the fan film makers.”, said Peters.

Apparently, Peters has been lobbying CBS for fan film guidelines for over four years. He told me about his various meetings over the years. “I first spoke with Liz Kalodner, EVP of CBS Consumer Products and the Head of Licensing, after my first trip to New Voyages back in 2010. We actually met on the Paramount lot when Liz was out for some meetings in L.A.  She’s really nice, and very sharp, obviously! She felt there was too many issues that would need to be overcome, but she was very positive about fan films in general.”

“I then spoke to John Van Citters, Head of Star Trek Licensing, who I managed the Star Trek: The Experience auction for in 2010. We had a very good working relationship. In 2013, at the Las Vegas Star Trek Convention, I met with Bill Burke, VP of CBS Consumer Products, and continued the conversation. Both gave me the same line.  CBS simply couldn’t come up with guidelines because there were too many contracts, union and guild agreements, actor contracts, etc.  It was too complicated. Bill even told me that it would take the CEOs of both CBS and Paramount sitting together in the same room, talking about Star Trek fan films, in order to get anything done.”

Then there was the well-known (and since thoroughly discussed) meeting between Alec and several CBS representatives at the Las Vegas Convention last Summer, where Alec’s auction company Propworx produced a giant Star Trek auction. “John Van Citters and Bill Burke met with me at my request. I was determined to get some guidance, but they still told me that CBS would neither tell me what I could do, or what I could not do.  They were afraid that any such guidance would potentially give up IP rights. Ironically, here we now finally doing what should have been done years ago!"

It seems pretty obvious to me that if CBS had possessed the internal will to put out guidelines back then, they would have avoided a lawsuit and saved themselves hundreds of thousands of dollars in legal fees.

As I said previously, this situation was inevitable, as fan films have increased in popularity and quality over the years. These changes have led other studios, notably Lucasfilm Ltd., to publicly support and assist fan films, even hosting them on their own websites.

And for those who might be curious as to what guidelines Mr. Peters and his group are planning to propse, here is their working draft:

PROPOSED STAR TREK FAN FILM GUIDELINES (DRAFT)
1.) There must be the following disclaimer at the end of each episode, and in all promotional and marketing materials, on all fan production websites:
"Star Trek" and all related marks, logos and characters are solely owned by CBS Studios, Inc. This fan production is not endorsed by, sponsored by, nor affiliated with CBS, Paramount Pictures, or any other Star Trek franchise, and is a non-commercial fan-film intended for recreational use. No commercial exhibition of distribution is permitted.
2) Fan productions may not sell, or give away as perks, any item with a Star Trek mark, logos or character including, but not limited to, the words "Star Trek", the Enterprise insignia chevron, images of the USS Enterprise, or any Star Trek trademark.
3) Fan productions may take donations, but all donations must go to the production of the fan film and may not be used to pay any of the principals.
4) Fan productions may pay professional cast and crew for their time working on the production.
5) If a production uses a SAG member, he or she must become a SAG New Media Signatory.
6) Finished fan films may be no longer than 50 minutes in length (the approximate length of TOS episodes).
7) Fan film makers give to CBS an unlimited, unrestricted license to use their films, or any portion thereof, in any format CBS should deem appropriate.

Personally, I think this is a pretty good start! It will be interesting to see how much of this gets incorporated into the final guidelines. I find it strange that the Godfather of the modern fan film, James Cawley, declined to participate in this discussion. Alec has mentioned in his blog that his relationship with James has its ups and downs, so the lawsuit may have put it on the "down" side of things for Mr. Cawley. Even still, CBS will issue these guidelines regardless of his participation. One would think a man of his standing in the fan film community would want to have a say in shaping them. Then again, he shut down his Facebook page, and his website is now "under construction", so who knows what's going on with New Voyages in the first place?

Either way, kudos to Alec and the other producers for working together to propose guidelines.  Incorporation of their efforts by CBS would certainly help guide Star Trek fan film producers, assuage concerned studio executives, and satisfy Star Trek fans who simply want more stories set in Gene Roddenberry's vast universe.

And thanks to Alec, for allowing me to share this with everyone!

(5/28/16: I have corrected this article based upon information released in a statement from Starbase studios. Previously, I had stated that eight had joined the Facebook chat and were part of the discussion, which conflicts with Mr. Peters' later statement that half of them actively participated. I also corrected the article to show that Starbase Studios only produces one production themselves, while allowing several others the use of their facilities)

Comments are now moderated. Please have your comment be respectful, substantive, and on-topic. Personal attacks, snide remarks, and name-calling are not tolerated, and your comment will not be approved if they contain such. This is not YouTube, folks!

Stuff I Think About

Hubcap Dave
I'm a single middle-aged guy with stuff on my mind.